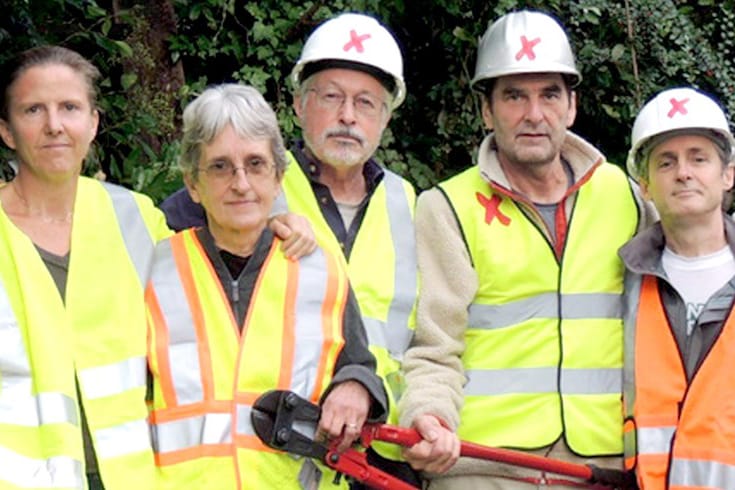 Valve Turner Ken Ward has filed an appeal of the denial of his climate necessity defense. Climate Defense Project is working on the appeal, as is the Civil Liberties Defense Center, which has issued the following press release:

Mount Vernon, WA — An appeal was filed today in the Washington Court of Appeals challenging a Superior Court ruling that denied climate activists the ability to present a necessity defense to a jury.  Ken Ward, a climate activist from Corbett, Oregon, was charged with sabotage and burglary after an October 2016 protest in which he and four other activists temporarily blocked the flow of tar sands oil from Canada into the United States. Mr. Ward, a veteran environmentalist who for years pursued legal avenues to address climate change before turning to civil disobedience, testified during the two-day trial that his actions were intended to block the passage of harmful fuels into the United States and to inspire individuals and political leaders to act to avert catastrophic global warming.

Mr. Ward admitted that he entered a Kinder Morgan pipeline facility near Anacortes, Washington on October 11, 2016, and turned a valve to shut off the flow of tar sands oil from Canada. At the same time, other activists turned pipeline valves in Montana, North Dakota, and Minnesota.

The pretrial decision by the Skagit County Superior Court Judge prohibited evidence that Mr. Ward’s climate defense action was justified by the need to avert climate change. Calling the questions of whether climate change exists and what causes it a matter of “tremendous controversy,” the Judge blocked Mr. Ward’s expert witnesses from testifying about the science of climate change, its current and future effects, and the lack of meaningful legal alternatives to address it. The Court’s statements contradicted scientific consensus about the existence and origins of climate change and seemed to violate well-established rules protecting defendants’ rights to put on a defense.

Today Mr. Ward, through his attorney Lauren Regan of the Civil Liberties Defense Center, filed an appellate challenge to that decision.  “If this appeal is successful, it will help establish a defense that will recognize the severity of the climate crisis we face, the zealous greed of big corporations profiting off of the destruction of the planet and the suffering of its inhabitants, and the unwillingness of governmental leaders to protect the people from this egregious profiteering.  In light of Washington State’s own Department of Ecology testimony that given existing political realities, it would be “futile” to ask the Legislature to abide by a statutory mandate to strengthen existing greenhouse gas emission limits, our clients felt they had no reasonable alternative to protect people and the planet.”  Lauren Regan, attorney for Mr. Ward.