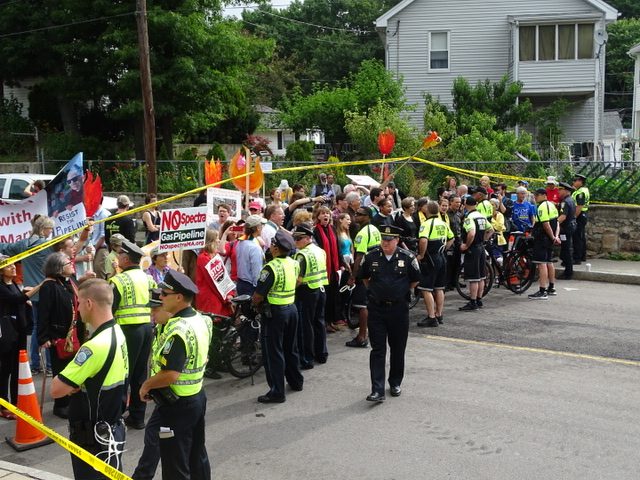 CDP in the Press: Reactions to the Outcome in the West Roxbury Case

CDP co-founder Alice Cherry was quoted at length in a ThinkProgress article about the West Roxbury case (which you can read about on our Updates page), in which the judge accepted the activists’ necessity argument after prosecutors downgraded the charges to avoid a jury trial:

“According to Alice Cherry, co-founder and staff attorney of the Climate Defense Project, which was part of the legal team for the West Roxbury protesters, the necessity defense is an old legal doctrine that allows people to argue that a crime was justified in order to prevent greater harm — like a ship captain dumping cargo in order to prevent a ship from sinking.”

“Because the prosecution chose to downgrade the charges, the West Roxbury protesters were not able to mount a full necessity defense in front of a jury — something that Cherry described as a “missed opportunity for the climate movement,” because presenting a full case in front of a jury can often attract more attention, and help move public opinion, more than arguing a case before a judge.

“Democratic deliberation on important social issues is uniquely facilitated by jury trials, and these defendants had hoped to contribute to a rich history in which jury trials have helped advance public opinion and drive social progress,” Cherry told ThinkProgress via email.”

“I think we’re seeing a pretty rapid development of this particular corner of criminal law doctrine in response to changing social conditions, along with democratic pressure on courts in an era when the political branches of government cannot or will not respond to the climate crisis like the emergency that it is,” Cherry said. “The case is significant in that it is part of an upsurge in strategies — in the U.S. and around the world — that enlist judges and juries in combating climate change, and people are paying attention.”

“According to Alice Cherry, a co-founder of the Climate Defense Project, which helped represent the West Roxbury activists, Driscoll’s ruling was the first of its kind in a civil case involving climate protesters.”

And here is further press on the outcome from The Independent, Patch, Shadowproof, Ecowatch, ZME Science, Dissident Voice, The Western Journal, Sierra, Common Dreams, and Vice News, as well as a good summary of the necessity defense in climate cases from the Sightline Institute.