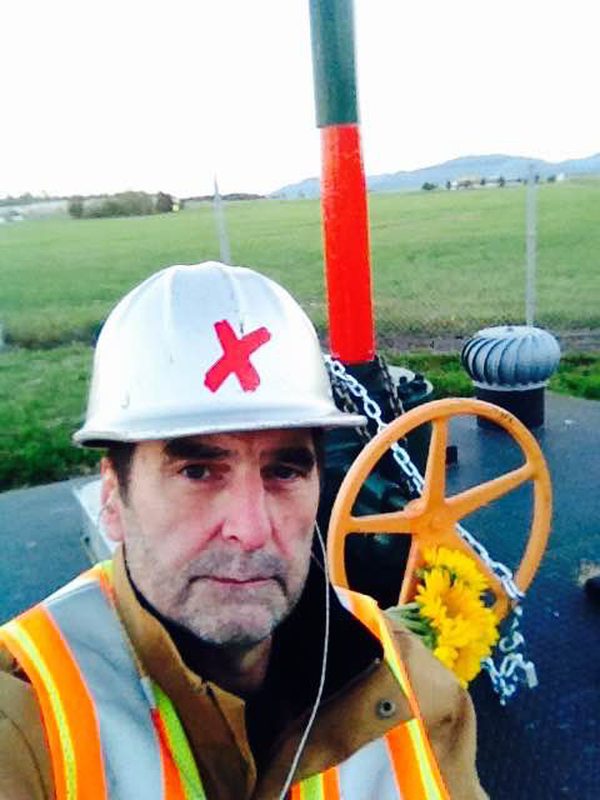 Mount Vernon, WA — A Washington state judge has ruled that Ken Ward, a climate activist who who helped to temporarily block the flow of tar sands oil from Canada to the United States in an October protest, cannot present the climate necessity defense at his trial scheduled to begin on May 22. The decision — which limits Mr. Ward’s constitutional right to defend himself in court — bars Mr. Ward from from arguing to a jury that his actions were necessary, and prohibits him from calling expert witnesses to testify about the ongoing harms of climate change and the need for grassroots civil disobedience to impel policy change.

Mr. Ward, who has worked in the environmental movement for decades, faces charges of sabotage and burglary after admitting that he entered a Kinder Morgan pipeline facility near Anacortes, Washington and turned a valve  to shut off the flow of tar sands oil from Canada. He acted in conjunction with other “Shut It Down” valve turners in Montana, North Dakota, and Minnesota, who were responding to a call for action from the Standing Rock pipeline protest in North Dakota.

The controversial order by Judge Michael E. Rickert of the Skagit County District Court granted the State’s request to block Mr. Ward’s proposed evidence and arguments after its first, failed attempt to convict him in a criminal trial earlier this year. In February, a jury deadlocked on Mr. Ward’s charges, allowing him to walk free. Judge Rickerts denied Mr. Ward’s climate necessity defense prior to that trial as well, although Mr. Ward was able to tell the jury about the motivation for his actions.

The State decided to try Mr. Ward again. His is the first of five trials of the Shut It Down defendants anticipated to take place this summer.

The denial of the necessity defense represents a troubling restriction on the right to defend protest actions in court. In a lengthy motion to the court, Mr. Ward’s defense team — which includes attorneys from the Civil Liberties Defense Center and the Climate Defense Project, as well as Seattle attorney Ralph Hurvitz — provided ample evidence of the imminence of climate change and the need for immediate action to address it. Relying on centuries of legal precedent, the defense argued that Mr. Ward had the right to justify his act of civil disobedience, noting that a jury had already failed to convict Mr. Ward even when it was barred from hearing his full defense.

“The Constitution guarantees the right to a complete defense, and juries are supposed to decide whether or not a defendant’s conduct was justified,” said Kelsey Skaggs, a staff attorney at the Climate Defense Project and a member of Mr. Ward’s defense team. “It’s disconcerting to see a judge impose his own opinion about the value of protest so as to limit these fundamental rights.”

Judge Rickert’s ruling — which was delivered orally and without a written opinion — followed a court filing by the prosecution that criticized climate activists for trying to change the law and lambasted their attempts to use civil disobedience and courtroom activism to reform climate policy. The prosecution also cast doubt on the science of climate change, writing that “[s]ome would even argue that it is not a true threat to begin with, as there are clearly different sides to the issue.”

The effort to depict climate science as controversial is in tune with Trump Administration efforts to delegitimize years of consensus about the seriousness of global warming, and follows Judge Rickert’s statement in a prior hearing that “there’s tremendous controversy over the fact whether [climate change] even exists.”

“While presenting a necessity defense in court would enable Ken Ward to tell the full story of his act of conscience, this is not a setback.” said Marla Marcum, Director of the Climate Disobedience Center. “Ken’s poise and determination in taking decisive action to avert climate cataclysm was the necessary thing to do, and is still the necessary thing to do. He will continue to inspire people across the country to do what’s needed in the face of government inaction.”

Mr. Ward will proceed to trial on May 22 and intends to testify in his own defense.

PrevCDP in the Press: Montana Valve-Turner Trial
CDP Author: Do Climate Activists Have a Legal Justification for Civil Disobedience?Next