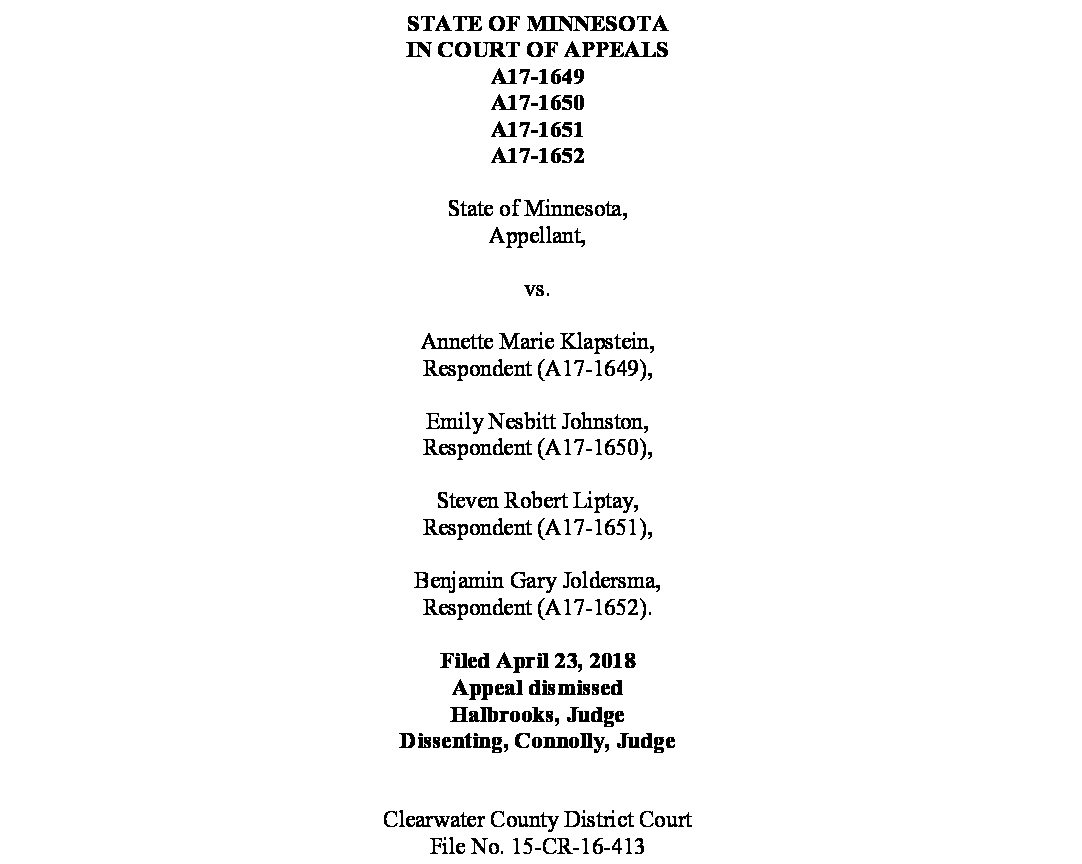 In a high-profile victory for climate activists and lawyers, the Minnesota Court of Appeals ruled today that four protesters may present their climate necessity defense at trial. The decision — which rebuffed prosecutors’ attempts to keep the defense out of court — allows the activists to argue in court that their October 2016 civil disobedience action against a tar sands pipeline was justified by the necessity of addressing the climate crisis. As similar climate necessity defenses have been presented by activists across the country with increasing success, today’s decision is the first by an appellate court to recognize the validity of the legal strategy.

The four defendants who helped to turn off the valve on the cross-border pipeline — Annette Klapstein, Emily Johnston, Steven Liptay, and Benjamin Joldersma, who were working in coordination with “Shut It Down” activists in three other states — first presented the climate necessity defense in late 2016, offering to present expert testimony and evidence on the iminent harms of climate change, the failure of government officials to address the climate crisis, and the effectiveness of civil disobedience. After the Clearwater County District Court allowed the defense in October 2017 (a first of its kind written decision in a jury trial, quickly followed by another decision allowing the defense in a Spokane, Washington court), the state of Minnesota appealed, arguing that allowing the defendants to present evidence about climate change would have a “critical impact” on the prosecution’s ability to make its case and was therefore ripe for appeal.

In an amicus brief submitted in December, over one hundred law professors urged the appellate court to reject the prosecutors’ argument, noting that defendants have a constitutional right to present a full defense and that the necessity defense is a well-established principle of law.

In today’s unpublished opinion signed by Judge Jill Halbrooks, the Minnesota Court of Appeals dismissed the prosecution’s concern. Noting that “necessity is an effective defense to a criminal charge if the harm that would have resulted from compliance with the law would have significantly exceeded the harm actually resulting from the defendant’s breach of the law,” the court ruled that the prosecution would have to wait for trial to make objections to evidence and jury instructions.

“This is a big win for anyone who cares about climate change,” said Kelsey Skaggs, a co-founder of Climate Defense Project and a member of the defendants’ legal team. “These activists make a compelling case that their protest was justified, and the court has recognized their right to have their day in court. The climate necessity defense is an important tool for pushing back against efforts by the federal government and industry to silence opposition to the reckless development of fossil fuels.”

Climate activists have increasingly turned to the climate necessity defense to justify acts of civil disobedience and to rally public support for increased action on climate change. In addition to the Minnesota and Washington victories, a court in Boston recently found a large group of activists not responsible by reason of necessity after facing civil infractions stemming from an anti-pipeline protest (prosecutors in that case downgraded their initial criminal charges in an apparent attempt to avoid a climate necessity trial). These advances have occurred as activists face increased repression from industry-funded state laws that target protests against the energy industry and as a growing number of lawsuits target oil companies for their decades-long effort to hide the warming effects of fossil fuel use.

Today’s decision should allow the Minnesota activists to proceed to trial with a full climate necessity defense; a trial date has not yet been scheduled. The prosecution has 30 days to seek review of the decision at the state supreme court.

The unpublished opinion is available here.