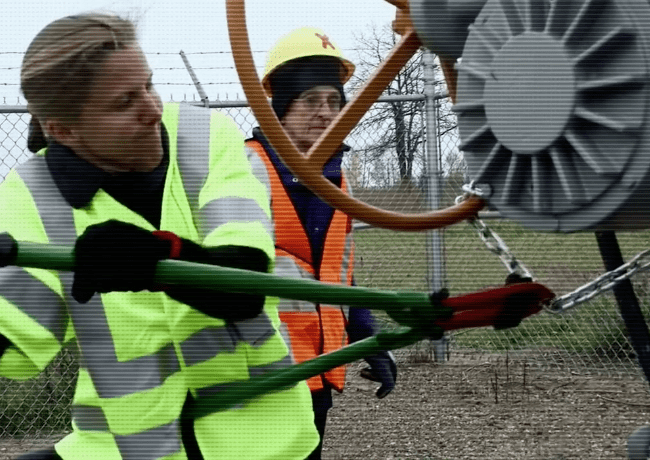 Berkeley, CA — Climate activists secured a significant victory on Friday when a Minnesota judge issued a written opinion allowing the presentation of the climate necessity defense at a jury trial. The case stems from a set of coordinated “Shut It Down” actions last October, when activists across four states succeeded in shutting off the flow of tar sands through pipelines entering the United States from Canada. Following the court’s decision, the four Minnesota defendants — Annette Klapstein, Emily Johnston, Steven Liptay, and Ben Joldersma— will be able to present evidence that their actions were motivated by the necessity to address climate change. Only a few courts have allowed presentation of the climate necessity defense, and until Friday no judge in a jury trial in the United States had recognized the defense in writing.

Kelsey Skaggs of the Climate Defense Project, which is working with the defendants and provided pre-trial briefing, said, “This is a very important step forward in the legal side of the movement to stop unchecked fossil fuel extraction. By recognizing the strength of the defendants’ arguments in favor of direct action, the court acknowledged both the scope of the climate crisis and the people’s right to act when their leaders fail them. This decision will make it easier for other courts to follow suit.”

At trial, the defendants plan to put experts on climate science, pipeline safety, and civil disobedience on the stand. Prior to the judge’s decision, they submitted two lengthy briefs and affidavits from climate scientist Jim Hansen, activist and writer Bill McKibben, and Professors Tom Hastings of Portland State University and Martin Gilens of Princeton University. Attorney Tim Phillips and the Civil Liberties Defense Center are part of the activists’ defense team.

In recent years, activists have increasingly raised the climate necessity defense, but the majority of courts have ruled prior to trial that the evidence was insufficient to present to a jury. (Observers have raised concerns that this pre-trial barring of evidence violates protesters’ constitutional rights.) In Washington in 2016, the “Delta 5” defendants were able to present climate necessity evidence at trial before the court ruled that they had provided insufficient evidence to submit the defense to a jury. In the “Wawayanda Six” trial in Orange County, New York earlier this year, the court in a judge-only trial similarly allowed an initial “proffer” before finding that the activists had not acted out of necessity. Friday’s decision in Minnesota is the first time that a judge in a jury trial has explicitly found that defendants met the pre-trial burden of presenting evidence for each element of the defense.

Other “Shut It Down” defendants have likewise tried to raise the defense, with less success. In June, Ken Ward was found guilty of burglary in Washington, after a first trial that ended in a hung jury and the judge blocked his necessity defense. Last week, after a judge prevented necessity evidence, Michael Foster and Sam Jessup were convicted of felonies in North Dakota. In Montana, Leonard Higgins has been barred from arguing necessity at his trial in November. Activists and attorneys hope that Friday’s decision will be useful in any appeals of these decisions and in future climate necessity defenses.

A trial date for the Minnesota activists has yet to be set. A copy of the decision can be viewed here.

For more information on the climate necessity defense, visit www.climatedefenseproject.org.