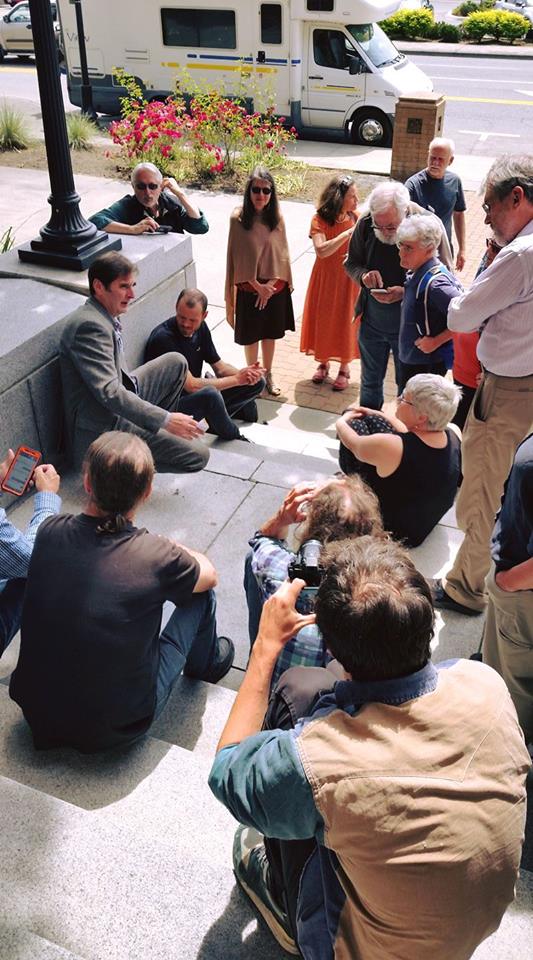 From our allies at Climate Direct Action:
Sabotage Charge Dropped; Ward and Supporters Vow to Overturn His One Remaining Conviction
[Mt. Vernon, Washington — June 23, 2017]  Climate activist Ken Ward, the “valve turner” who was arrested and prosecuted for closing the emergency valve on an oil sands pipeline, and who argued in front the jury with considerable success that the urgency of climate change compelled him to act, was sentenced today in Skagit County Superior Court in Washington State. His sentence of two days in jail has already been fulfilled.

After a first trial ended in a hung jury, in a second trial earlier this month, the jury found Ward technically guilty of second degree burglary, but deadlocked (for the second time) and failed to find him guilty of the charge of sabotage.

The facts of Ward’s action were not in dispute, only whether his motive of helping prevent harm to the climate and calling attention to the climate crisis can be used in court as justification for acting as he did. Ward and his legal team were not permitted by the judge to argue a “necessity defense,” which means they could not call expert witnesses or submit expert testimony about the harms that carbon-intensive oil sands do to the climate, and how climate change will affect the region, to justify Ward’s action.  But in his own testimony, Ward got enough of his point across that one jury refused to convict him of burglary, and two juries refused to convict him of sabotage.  In the second trial, the second jury did reluctantly convict him of burglary.
For that conviction, Judge Michael Rickert used the “First-Time Offender Waiver” and sentenced Ward to 32 days, including 2 days in custody (served when he was arrested) and 30 days (240 hours) community service in Skagit County, plus six months’ community supervision. The state may still file for restitution. The judge dropped bail, and released Ward on his own Personal Recognizance.  The State declined to re-file the sabotage charge.
“Given we weren’t allowed allowed to offer the defense that makes any sense, i.e. that climate change necessitates citizen action like mine, this was a remarkable outcome in both trials,” said Ward.  “Juries considered these two charges twice, and three of the four deliberations ended in a hung jury.  In the fourth, they gave me a minimalist conviction of burglary.  But after the trial the jurors told us they were reluctant to hand it down, and that if they had been given more leeway by the judge they probably wouldn’t have convicted me.  The conviction is not final. We are appealing it with full confidence that we will win. I expect to be back in  court trying these issues all over again.’
“It was also interesting to listen to Judge Rickert, who found this a very difficult sentencing decision to make,” Ward said.
In announcing the sentence,  Judge Rickert, who retires in five days, said,  “I’ve thought about this a lot since the first trial.” He pointed out that “we abandoned the head-on-the-pike sentences hundreds of years ago,” but said he believed there is validity to sending a message that might influence the actions of others. He noted that Kinder Morgan, though unpopular, “has to be protected too.”  But he said he viewed Ward’s case as a rarity: “No monetary motive, no greed or addiction. If I was going to break into something I’d at least have a beer with me.”
During the sentencing hearing, Lauren Regan, Ward’s attorney, reminded Judge Rickert that Ward’s action was highly principled.  It was planned months in advance, and Ward took painstaking safety precautions.  She also pointed out that continuing to pump tar sands every day exacerbates climate change and endangers the community.  Ward believed so strongly in that danger, Judge Rickert said, that “he was willing to throw the tea off the boat into the harbor….Will jail change his behavior? Will it change other people’s behavior? No.”
Meanwhile the pipeline company Kinder Morgan is not changing its behavior.  It is proposing to double the size of its oil sands pipeline.  Ward argues the industry and the federal government doubling down on carbon-intensive fossil fuels regardless of climate impacts underscores the importance of adjudicating climate action in the courts.   “I think we’re entering a time where we can really expect to the courts to be the place we should pursue change, more so than in other civic forums,” he said.  “The courts are now the one forum where facts matter, and where there is a clear mechanism to distinguish facts from non-facts.  As the question of the legality of citizen climate actions like mine  continues to make its way through the courts, it will lead to cracks in the armor of denial, and wider recognition that it’s time for citizens to stand up to protect the climate.”
More climate activists are facing charges for taking part in the related “valve turner” actions including Leonard Higgins in Montana, and Annette Klapstein, Emily Johnston, Ben Joldersma, and documentarian Steve Liptay in Minnesota.  They are also pursuing a necessity defense.  The pre-trial hearing for the Minnesota defendants is scheduled for August 15 in Clearwater County District Court in Bagley, Minnesota.

PrevCDP Author: Dissidents Ramp Up Direct Action Against Climate Destroyers. Who Will the Courts Defend?
CDP Author: Putting the Climate Necessity Defense in Front of JuriesNext