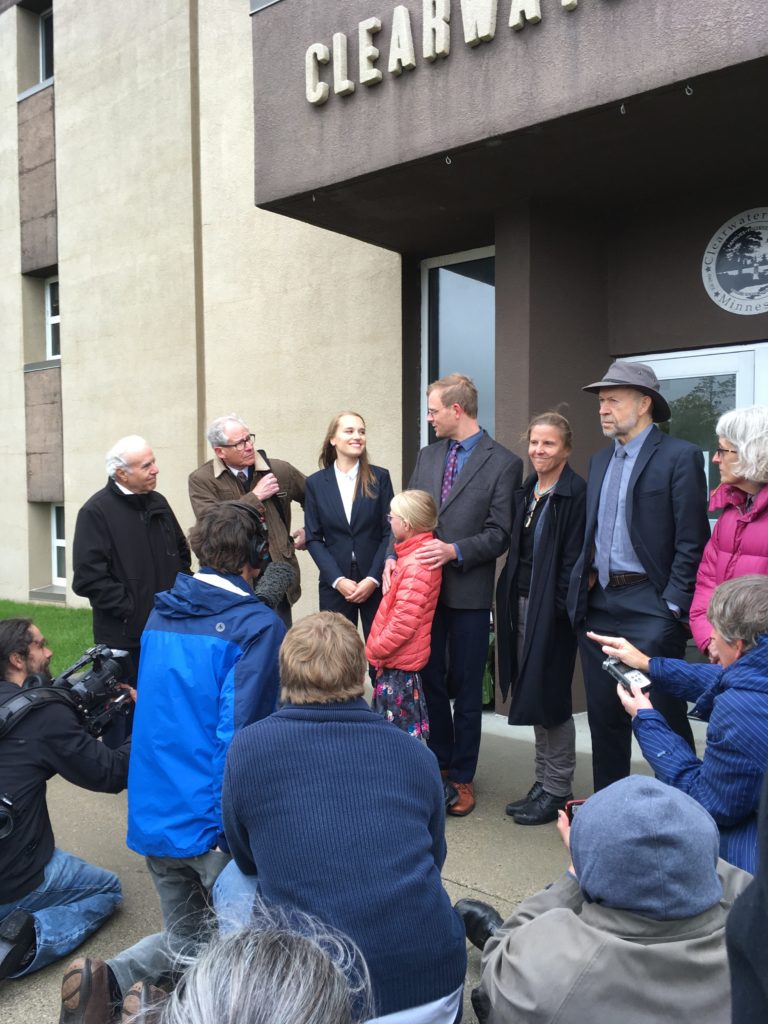 Victory in Minnesota: Valve Turners Acquitted of All Charges

The climate movement secured a major victory today after a judge dismissed all charges against the Valve Turner activists who shut down a tar sands pipeline in northern Minnesota nearly two years ago. The activists — who were represented by Lauren Regan of the Civil Liberties Defense Center, local counsel Tim Phillips, and Kelsey Skaggs of Climate Defense Project — were prepared to present a climate necessity defense featuring expert testimony on the dangers of climate change and the effectiveness of civil disobedience. After the prosecution closed its case on the second day of trial, however, the judge agreed with the defense that there was insufficient evidence that the activists — Emily Johnston, Annette Klapstein, and Benjamin Joldersma — had damaged or helped to damage the pipeline, and tossed out all remaining charges.

“This victory is an important rebuke to government efforts to punish activists while letting harmful industries off the hook. At the same time, we need to keep fighting to make sure that activists’ voices and rights are respected in the courtroom, particularly for those who are less privileged,” said Kelsey Skaggs.

Although the defendants were disappointed that they were unable to present their case to a jury, the acquittal is a significant step forward for activists who have increasingly turned to the court system to press their demands for action on climate change. In three cases involving Valve Turners in other states who coordinated their actions with the Minnesota activists, defendants were convicted after being denied the opportunity to present a necessity defense. In Minnesota, today’s courtroom victory follows a lengthy effort to defend the activists’ right to argue climate necessity, a battle which went all the way to the state supreme court.

Among the experts who had been slated to testify in the case were former NASA scientist James Hansen, 350.org co-founder Bill McKibben, Harvard Law professor Lawrence Lessig, and experts on political science, the history of social movements, pipeline safety, and other topics.

Climate Defense Project continues to work with climate activists across the country and to promote the climate necessity defense in various jurisdictions.