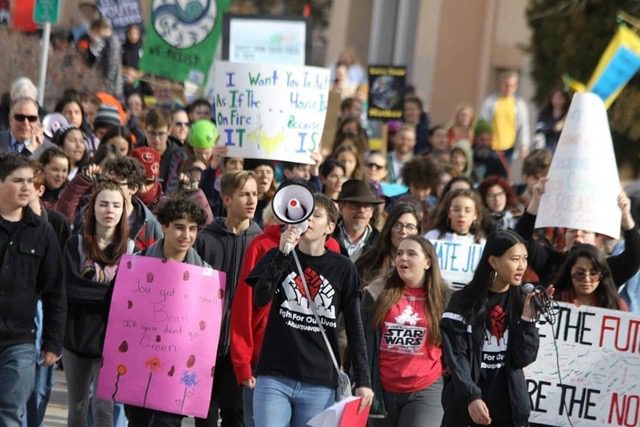 Student-led campaigns for fossil fuel divestment at Johns Hopkins University in Maryland, the University of New Mexico, and Marquette University in Wisconsin filed requests today asking that state and school officials investigate continued investment in the fossil fuel sector by school trustees. The requests — in the form of complaints filed with the Maryland and New Mexico attorneys general and a letter sent to Marquette leadership — describe the harms of climate change and fossil fuel extraction and the growing financial risk of fossil fuel investments, alleging that such investments violate fiduciary duties held by trustees to further schools’ charitable purposes and manage their endowments prudently. The schools are the latest additions to a growing list of institutions where similar complaints have been filed on behalf of campaigns by the nonprofit organization Climate Defense Project, coming in the wake of complaints at Harvard University and the University of Wisconsin-Madison last spring, and at Cornell University and Boston College in 2019 and 2020, respectively.

The campaigns announced their filings at Invest-Divest 2021, an event hosted by a coalition of global organizations to announce new divestment commitments and call on global leaders to reinvest fossil fuel money in just climate solutions as COP26 prepares to meet next week. The coalition released a report today that details how institutions representing an unprecedented total of $39.2 trillion worth of assets have now committed to some form of fossil fuel divestment.

Over 1,300 universities, foundations, pension funds, and other institutional investors have dropped fossil fuel stocks after calls for divestment began over a decade ago. In September, following meetings between divestment campaigns and the Massachusetts Attorney General’s office, Harvard University announced that it would refrain from new fossil fuel investments and wind down its existing holdings, citing fiduciary responsibility. The John D. and Catherine T. MacArthur Foundation also pledged to eliminate fossil fuel holdings from its $8 billion endowment in September, along with Boston University, California State University, and the University of Minnesota.

The newest complaints rely on similar legal arguments as those filed previously, citing the Uniform Prudent Management of Institutional Funds Act, a law governing the management of charitable funds by nonprofit organizations. “The law is clear: universities are required to invest their endowments so as to further their educational mission and promote the public interest,” according to Ted Hamilton, an attorney at Climate Defense Project. Fossil fuel investments, says Hamilton, cannot be squared with those duties. Among the harms described in the complaint are public health challenges and damage to university campuses caused by flooding, extreme weather, and other impacts of climate change.

Organizers with the campaigns said that legal arguments were among the few avenues left to them, with school leadership reluctant to engage in dialogue. “This complaint was not a first resort, but we think it’s important to keep pushing for fossil fuel divestment before it’s too late to prevent major climate disasters,” said Elly Ren, a student organizer with Refuel Our Future, the fossil fuel divestment campaign at Johns Hopkins. “Political obstructionism by fossil fuel companies has only gotten worse in recent years. As more and more groups move money out of the fossil fuel economy, they are freeing up funding for real climate solutions.”

Climate Defense Project (CDP) is a nonprofit organization that advocates for transformative legal action to promote climate justice. CDP has been a leading advocate of the climate necessity defense, an argument for the legal justification of nonviolent civil disobedience to avert climate- and pollution-related harms, and has filed complaints with state attorneys general on behalf of fossil fuel divestment campaigns at colleges and universities.