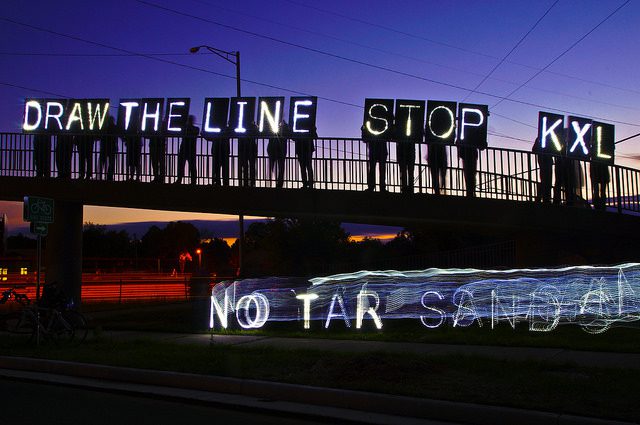 Lessons from the Climate Periphery

After President Trump issued executive orders seeking to resuscitate the Keystone XL (KXL) and Dakota Access Pipelines (DAPL), the climate movement returned to strategizing about how to defeat fossil fuel projects it thought it had beaten. It’s the latest round of battle in the war to keep dirty energy in the ground, and with all three branches of government now opposed to even the piecemeal climate advances of the Obama administration, the conflict has escalated.

As the climate movement, working in tandem with the broader anti-Trump opposition, seeks to block the expansion of fossil fuel infrastructure, it’s important to take a step back and analyze the possibilities for action. This post will focus on climate legal action as one strategy among others, including direct action and political organizing.

Climate legal action seeks to reverse fossil fuel development, establish greenhouse gas emissions limits, and further climate justice through a variety of legal tools like lawsuits, criminal representation, administrative petitions, and legal reform. Some tactics, such as suing the EPA to issue more stringent pollution standards, are decades old, while others, such as bringing constitutional claims against the federal government, are new.

On the other hand, peripheral legal action indirectly addresses climate change through related issues, such as by challenging the right of pipeline operators to seize private land for development, vindicating indigenous treaty rights, or defending climate protesters. An example is filing a federal police brutality lawsuit on behalf of anti-pipeline activists.

Because our leaders are still often reluctant to engage directly with climate change — consider the failure of climate legislation, the Supreme Court’s suspension of basic emissions regulations, and, most egregiously, the new administration’s denial of the phenomenon of global warming — efforts that seek to kill fossil fuel infrastructure projects or rewrite laws based solely on climate science usually fail. In his article, Ted concludes that climate activists are often more successful when they take a peripheral approach that does not require a judge, president, agency, or legislature to act directly on behalf of the climate. Peripheral strategies instead allow activists to use tactics of delay and uncertainty that put industry opponents on their heels and create space for powerful actors to reach climate-friendly results, even while the issue of climate change itself lurks off-stage.

This strategy succeeded in defeating the KXL pipeline, the first major victory for the climate movement. (It’s important to note that debate continues over whether the pipeline’s rejection actually made a difference in North American fossil fuel production). When TransCanada first proposed the pipeline, it was a forgone conclusion that the president would approve the company’s request for permission to cross the Canadian border. Core legal approaches, such as suing the Army Corps of Engineers to force it to take into account the pipeline’s climate consequences or urging the State Department to conduct a better climate analysis in its environmental impact statement, failed to prevent preliminary regulatory approval.

But peripheral methods, like rewriting Nebraska’s eminent domain laws and defending arrested climate activists, delayed TransCanada’s operations for years. As the KXL languished in regulatory logjams — for many reasons except its possible impact on the climate — the political risk of approving the pipeline came to outweigh the risk and uncertainty of approval. When President Obama finally rejected the pipeline, he did so not out of direct concern for its global warming consequences but because of indirect worries over the U.S. position in international climate talks.

The lesson? Given the reluctance or refusal of political and judicial leaders to directly engage with the question of climate change, climate legal action should aim at peripheral issues, where progress is easier. Success on the periphery produces the same result as success at the core: nixing climate-disruptive projects.

Veterans of the environmental movement may be wary of embracing uncertainty and delay, which for decades have been used by industry to kill pro-environmental regulations. But we find ourselves in a drastically different climate context from even ten years ago: clean energy outperforms dirty fuels on the market, the international community has agreed for the first time to (admittedly inadequate) warming targets, and the previous administration took a first step toward needed policy changes with a rash of pro-climate moves.

These advances need to be defended against the strengthened fossil fuel regime that now largely controls the federal government. Delay worked in the first round of conflict at Standing Rock, where steadfast occupiers held out against violent attacks by law enforcement until the government dropped support for DAPL. A similar approach is needed to block the revival of the pipeline and the KXL, and it can be used to challenge, defy, and pester the new fossil fuel regime until it loses power.

Uncertainty — frequently cited by climate deniers as a reason not to regulate greenhouse gases — can be exploited by climate advocates to convince judges, administrators, and the public that any steps away from the Paris Agreement commitments or the Obama Administration’s climate regulations pose serious risks to the economy and the planet. The fossil fuel regime’s disruption of the status quo should be painted as a dangerous disruption of an already volatile world, while action consistent with warming limits should be presented as safe and non-controversial.

Taking advantage of peripheral conflicts, delay, and uncertainty is easier said than done. But one thing is certain: in a time when the political stakes of climate change are clearer than ever, the success of climate legal action will depend largely upon how its practitioners conceive of themselves as political agents navigating the realities of public perception and institutional intransigence.

The potential of climate legal action at the periphery is directly linked to the idea of intersectionality, which maintains that seemingly isolated injustices and struggles — such as patriarchy and environmental injustice — are connected. In seeking victories for their own cause, climate activists move to the climate periphery and find themselves at the core of other issues, such as indigenous land conflict. With due regard for the experience and leadership of its allies, the climate movement will benefit from connecting its fight to other efforts against extractivism and neoliberalism.

The silver lining of the Trump Administration and the fossil fuel regime it represents is that these connections are now sharper than ever. The growing opposition will be defined not so much by the diversity of its goals as by the unity of its commitment. The climate movement must seize this moment not only to prevent backwards progress but also to end the dominance of the fossil fuel industry, with a clear view of the strategies and methods at hand.