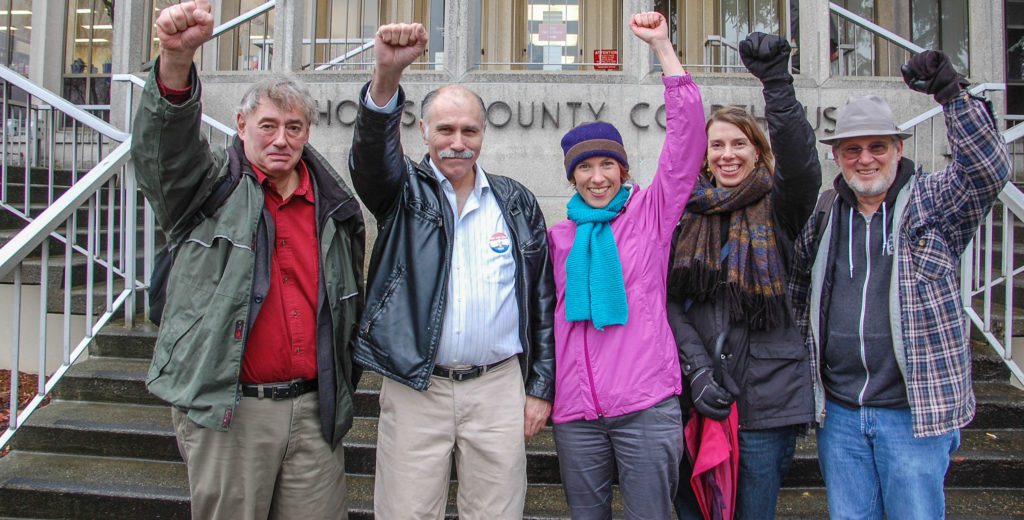 On February 14, the Climate Defense Project (CDP) filed an amicus curiae (“friend of the court”) brief in State v. Brockway, the case of the Delta 5 climate activists who blocked a crude oil train in Bellingham, Washington in 2014. The CDP brief argues that the Delta 5 protest was necessary — and that the trial court erred in denying the defendants’ climate necessity defense  — in light of the government’s failure to protect the climate, as is required by the public trust doctrine.

This brief is the first time that an appellate filing has applied the public trust doctrine to the climate necessity defense.

In 2015, the State v. Brockway trial judge refused to instruct the jury on the necessity defense despite ample evidence of the imminent threat of climate change, the dangers of crude oil train shipping, and the lack of reasonable alternatives to civil disobedience. The defendants have petitioned the Washington Court of Appeals to review this misguided decision. The CDP brief was filed in support of this petition, and CDP anticipates filing an expanded amicus curiae brief at the next stage of litigation should the Court of Appeals accept review.

Courts have long recognized the public trust doctrine, which requires state and federal governments to hold vital natural resources in trust for the public. Recent decisions have extended this doctrine to the atmosphere, requiring policymakers to prevent dangerous levels of global warming that would harm human and natural health. Similarly, a federal court in Oregon ruled in November that the Constitution protects the right to a stable climate system. Despite these duties, state and federal governments continue to permit, subsidize, and lightly regulate dangerous levels of fossil fuel extraction and combustion.

The CDP brief, building off of these legal developments, argues that the Delta 5 defendants had a clear case for climate necessity. The brief argues that the protest was “legally necessary, specifically in light of the overwhelming evidence presented at trial regarding (1) the certainty and legal cognizability of the harms to public trust resources caused by crude oil transport and; (2) the unavailability of legislative or other legal alternatives to address climate change, given the constitutional nature of the duties at issue and the government’s history of violation of such duties.”

Linking public trust and constitutional climate rights to the climate necessity defense has great potential for grassroots climate activists seeking to reclaim our energy future from powerful fossil fuel companies. As the brief notes: “To vindicate their rights, and the rights of present and future generations, as public trust beneficiaries, citizens with limited financial resources have few options (legislative or otherwise). Defendants’ invocation of the necessity defense in this case is supported not just by the severity of the harms Defendants sought to avert but by the concrete and immediate constitutional legal injuries suffered by Defendants and the citizens of Washington, as public trust beneficiaries, and by the futility of appealing to the State for redress.”

Andrea Rodgers, a senior staff attorney with Our Childrens Trust, assisted with the CDP amicus effort.

A decision on the Delta 5 appeals petition is expected this spring or summer.

The brief can be found here.