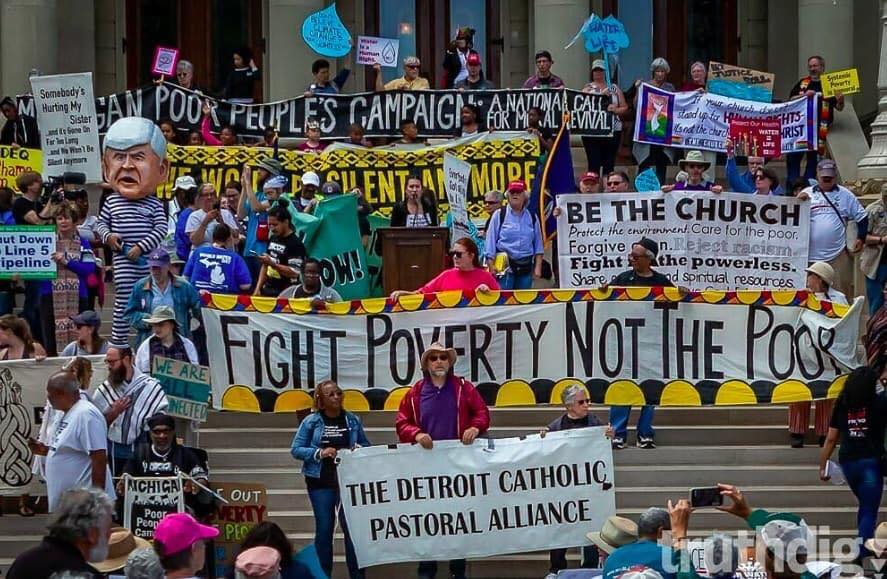 A Lansing, Michigan prosecutor has unexpectedly dropped charges against 13 protesters who were poised to argue the climate necessity defense at a trial initially scheduled for this month.

The defendants, activists with the Michigan Poor People’s Campaign, were arrested in June 2018 following a protest at the Michigan Department of Environmental Quality (MDEQ) headquarters in Lansing. The protest involved several hundred people.

The activists had initially faced felony charges of resisting and obstructing a police officer, though the prosecutor later downgraded the charges to a misdemeanor (disturbance of a lawful meeting).

The activists had planned to present the necessity defense at trial, arguing that their actions were justified by MDEQ’s pattern of ignoring threats to public safety and local water quality from oil pipelines and industrial facilities. As examples, they cited the agency’s role in allowing and covering up the Flint water poisoning and in permitting Enbridge’s Line 5 project, which threatens the Great Lakes. The activists also sought to bring attention to the climate crisis.

This week, the defense team filed a brief on the necessity defense and argued at a hearing that the activists should be permitted to present necessity evidence. At the hearing the judge postponed the trial from May to June and extended it to a full week, noting that she would take the issue of necessity under advisement. Two days later the prosecutor informed defense counsel that she would be dropping all charges against the activists.

This outcome furthers a trend in which prosecutors have dropped or downgraded charges against political activists — particularly climate activists — following revelation of their plans to present a necessity defense at trial. In this case the defense team had sought to present expert witness testimony from environmental law professor Nick Shroeck on the harms ignored by MDEQ, and from philosophy professor Gail Presbey on the effectiveness of civil disobedience in creating social and political change.

The defendants were represented by Michigan attorneys Julie Hurwitz, Stephen Milks, and Allison Kriger, a team coordinated by and through the National Lawyers Guild. Climate Defense Project provided advice to the local defense team.