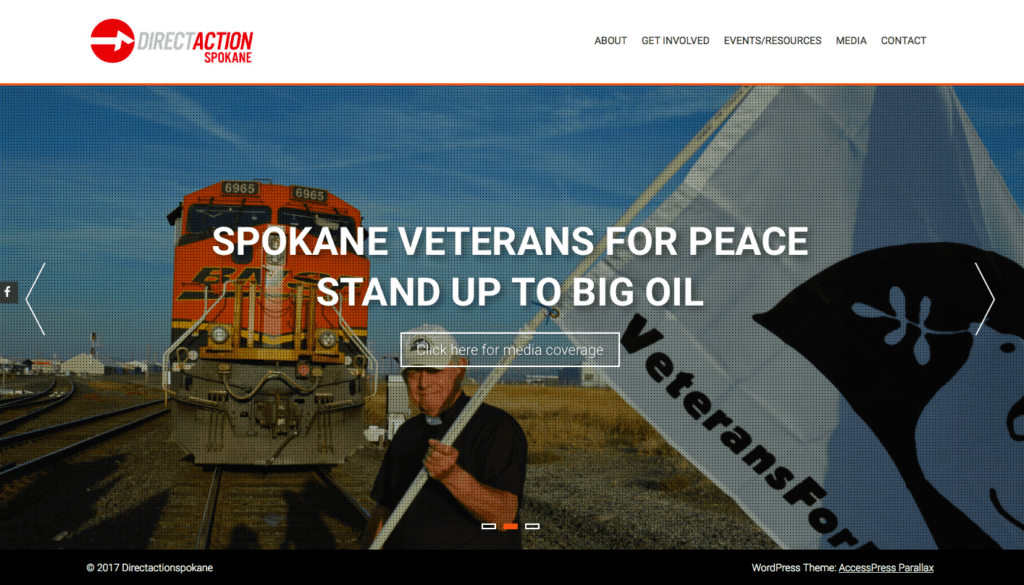 Berkeley, CA — A judge in Spokane, WA has ruled that a climate activist may present evidence that his act of civil disobedience was motivated by the urgent need to address the climate crisis. Monday’s ruling comes in the wake of a similar ruling in a Minnesota case, making it the second time in a week that a court has allowed presentation of the “climate necessity defense” at a trial of a climate activist.  Activists and attorneys hailed the two decisions as a sign that courts are finally acknowledging the scale of the climate crisis — and the need for grassroots action to address it.

The Spokane case stems from a September 2016 action in which Reverend George Taylor participated in a blockade of coal and oil trains by members of Veterans for Peace. The ruling, by Judge Debra Hayes of the Spokane District Court, permits Taylor to call experts and to make argument in court about the science of climate change, the effectiveness of civil disobedience in creating social change, and the lack of alternative routes to addressing the problem. In several prior cases, activists have been barred from presenting the climate necessity defense, with judges making controversial rulings that climate science is unreliable or irrelevant and that defendants’ political motivations do not belong in court. Courts in Washington and New York have allowed presentation of necessity evidence before deciding that it was insufficient to support acquittal.

On Friday, however, Judge Robert Tiffany of the Ninth Judicial Court in Clearwater County, Minnesota issued the first written opinion allowing the defense to be presented at a jury trial in the United States. The decision clears the way for a group of defendants who shut off a tar sands pipeline in October 2016 to make their case in court.

That decision was almost immediately followed by the Spokane court’s decision, on Monday.

The necessity defense, which varies slightly by state, usually requires defendants to show that they broke the law in order to avoid a greater harm, that the harm they faced was imminent, and that there were no reasonable legal alternatives to their action.

“Courts are recognizing that climate change is an emergency and that immediate action must be taken to address it,” said Alice Cherry, a staff attorney with Climate Defense Project, which has assisted the activists in Washington and Minnesota and published on its website materials related to the climate necessity defense. “The necessity defense is a powerful tool for climate activists to make the case that their actions were justified. We anticipate that other courts will follow the reasoning of these decisions as the climate movement grows.”

A trial date in the Spokane case is expected in January but has not yet been confirmed. The Minnesota trial is currently scheduled for January.  A press release for the Minnesota case can be found here.