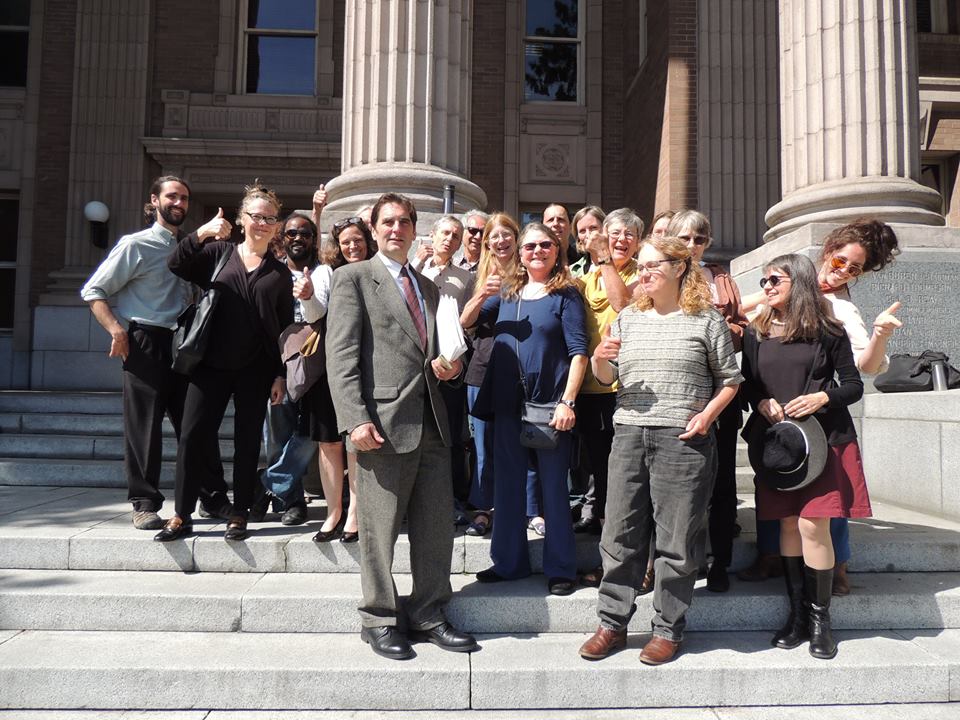 Mount Vernon, WA — Following controversial court rulings restricting his right to present a defense, climate activist Ken Ward received a split verdict today in a trial in Skagit County, Washington. Mr. Ward was found guilty of burglary, a Class B felony, while the jury failed to reach a verdict on a felony count of sabotage. The charges stemmed from an October 2016 protest in which Mr. Ward and four other activists temporarily blocked the flow of tar sands oil from Canada into the United States, calling on the federal government to take action to stave off catastrophic climate change. The prosecution’s failure to convict Mr. Ward of all charges came after a first trial earlier this year that resulted in a hung jury on both charges. Together, the results represent a backlash against prosecutorial overreach and a victory for climate activists who advocate the use of civil disobedience to address the climate crisis.

Mr. Ward, a veteran environmental leader from Corbett, Washington, turned the valve on a Kinder Morgan pipeline as part of a series of actions calling on the federal government to act decisively to address climate change, in solidarity with the Standing Rock anti-pipeline resistance in North Dakota. Prosecutors first tried to convict Mr. Ward of the felony charges — which are uncharacteristically severe for a case of nonviolent civil disobedience — in a trial in late January and early February, but the jury failed to reach a verdict. The government’s decision to retry Mr. Ward provoked criticism over waste of public resources and persecution of peaceful activists.

Mr. Ward received the split verdict after Judge Michael E. Rickert ruled prior to trial that the defense team could not present the “climate necessity defense,” an increasingly popular legal argument in which activists argue that their acts of civil disobedience are necessary to overcome corporate and governmental intransigence in the face of impending climate catastrophe. The ruling barred Mr. Ward from calling expert witnesses to testify about the science of climate change and the effectiveness of nonviolent direct action in creating political change.

That controversial judicial decision followed remarks made by Judge Rickert prior to the first trial that cast doubt on the scientific consensus on the causes of global warming, a theme revived by the prosecution in pretrial motions and jury questioning in the second trial.

Kelsey Skaggs, a staff attorney with the Climate Defense Project and a member of Mr. Ward’s defense team along with Lauren Regan of the Civil Liberties Defense Center and Ralph Hurvitz of Seattle, Washington, criticized the limitations placed upon Mr. Ward’s defense but emphasized the significance of the split verdict. “The right to present evidence and call witnesses is an essential part of the guarantee of a fair trial,” Ms. Skaggs said. “Especially in a situation like this, where Mr. Ward took courageous action in the public interest, the jury must be allowed to hear both sides of the story — not just the government’s biased view of what acceptable activism looks like. Even though Mr. Ward’s constitutional right to defend himself was violated — which we will address on appeal — the prosecution failed twice to convict Mr. Ward of sabotage, which is a big win against the criminalization of protest.”

The trials for Mr. Ward’s co-activists from the Shut It Down action are expected to be held this summer in Montana, North Dakota, and Minnesota. Mr. Ward’s defense team plans to file its appeal in the coming weeks.

PrevCDP Author: Do Climate Activists Have a Legal Justification for Civil Disobedience?
Understanding the Paris Withdrawal: It’s Still Up to the Movement to Make the FutureNext